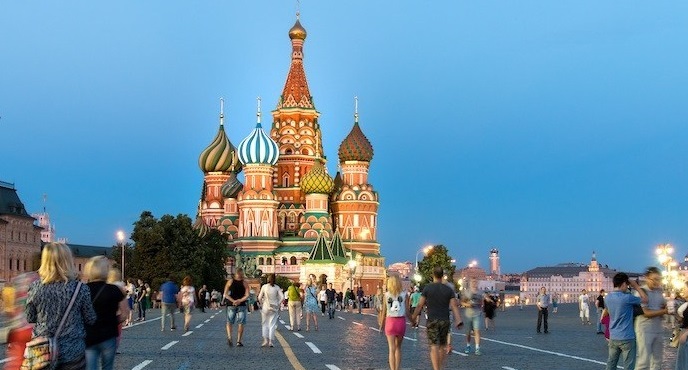 Ask anyone what they think of the Russian language, and you’ll likely hear the same answer: Difficult! If you believe the negative stereotypes about Russia, the lack of interest in its language seems understandable — it’s a dangerous country, a long ways away, freezing cold (etc. etc.). Nevertheless, we at I SPEAK Russian believe there are a hundred reasons to learn Russian! Here are just some of them:

Russia is a mind-bogglingly huge country. Interesting fact: It’s actually the biggest country in the world by area, and is significantly larger than the second country, Canada (Russia has 6.6 million square miles, compared to Canada’s 3.8 million). In fact, it crosses 11 whole time zones. And now imagine just how much there is to discover in this endless country! A few examples: Russia has a full 28 UNESCO World Heritage Sites. From the Kremlin and Lake Baikal to the Golden Mountains of Altai — there is immense cultural and ecological wealth in Russia.

Do you want to visit Russia as a tourist? Keep in mind that Russia has some of the lowest rates of English proficiency around. Just about 5% of Russians have a command of English, and in the majority of Russian cities, you’ll find almost no signs written in the Latin alphabet. Not exactly what ordinary tourist would dream about. So if you want to conquer the lands of the old Russian Empire, you can’t get around without at least a basic knowledge of Russian, at least some phrases and commonly used words. It’s definitely learning the Cyrillic alphabet and learning some phrases in order to connect with the locals on your trip!

No question about it — the land of the Tsars is exotic, straddling many of the cultural traditions between Europe and Asia. Maybe that’s why so many people think that Russia is somewhere way off in the distance and has nothing in common with the English speaking world. But actually, you can fly to St. Petersburg from London in just a little over three hours, which is shorter than the time it takes to get to Athens. Even for individuals based in the US, Canada and Australia, most of Russia’s top travel destinations are in continental Europe, so it’s not out of the way if you’re planning a grand tour of Europe!

Ask your friends what they think about Russian – most of them will say that it’s difficult. And it is true, actually. It’s one of the hardest languages for English speakers to learn, and has a complex grammatical structure. And the Cyrillic alphabet seems so foreign that it’s enough to put some people off learning the language — but it’s actually not nearly as scary as it looks. When you do learn it, you’ll feel a real sense of accomplishment from the fact that you can read another alphabet! Getting to grips with its idiosyncrasies means leaving what is familiar behind and throwing yourself into the unknown. Yes, it’s scary at first, but you’ll feel amazing once you start speaking sentences and new words. You will feel even better when you will be understood by the natives!

When I say “you,” I mean anyone who’s never attempted to learn Russian. There are two challenges to learning Russian, and the Cyrillic alphabet isn’t one of them — with a little dedication, learning those 33 letters is a breeze. (Most of the shapes of letters are the same or similar, so you’ll just need to readjust how your brain associates letters with certain sounds.) The difficulties lie instead with a couple of grammatical rules, namely the declensions and the perfective and imperfective aspects of the verbs. Sounds like nonsense now, but it’ll make sense later. Even so, these barriers are still easier than drinking the Aral Sea dry!

This is admittedly a rather subjective statement, but has a nugget of scientific truth: Most people find languages with a rich variety of vowels appealing. Italian, for example, has the vowels A, E, I, O, U and characteristic diphthongs. This is one reason why Italian sounds so melodic to foreigners. Russian is the same way — even if it doesn’t get much credit for it. As a bonus, this Slavic language also has an astounding wealth of consonants, creating a captivating musical quality. Just listen to the Red Army Choir for a rich example. I’m no singer, but when speaking Russian, I feel as though I can actually carry a tune!

The fact is, Russian is far less popular as a second language than, for example, Mandarin — another language even more difficult for English speakers to grasp. This low popularity is a shame because there are a number of economic opportunities currently arising in Russia, Eastern Europe and Central Asia. And guess what: To get in on the act there, you have to speak Russian!

Because of the historical legacy of Stalin, the USSR and the Cold War — and even Vladimir Putin today — Russia is readily perceived as a threat. But when you learn Russian, your worldview changes twice in one go: First because you’ve acquired a new language (which is always an asset), and secondly because it automatically breaks down your preconceptions about a part of the world. The Russian people aren’t nearly as scary as they’re portrayed.

As soon as you learn a bit of Russian, a whole range of other languages is suddenly accessible to you. Russian is a member of the Indo-European language family, and specifically the Slavic family. Even with just a beginner’s grasp of Russian, you can quickly understand the other Slavic languages.

There are three subfamilies:

There is a Russian proverb: “It is better to see once than to hear a hundred times”. So I will spare you my other 90 reasons to learn Russian and let you discover this marvelous, mysterious language for yourself!