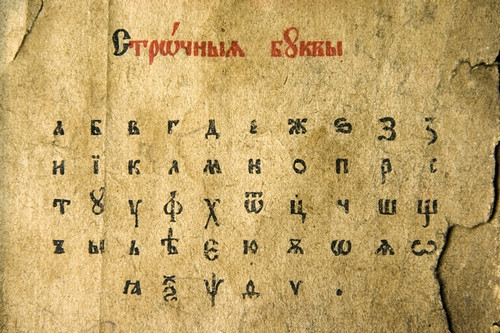 Lesson 1. The History of the Cyrillic Alphabet

The Cyrillic alphabet was named after Byzantine missionary St. Cyril in the 9th century, who, with his brother, Methodius, managed to create Slavic alphabet—the Glagolitic—this was primarily done to translate Greek religious texts to Slavic. It is on the basis of this alphabet that the Cyrillic alphabet was developed in the First Bulgarian Empire during the 10th century AD by the followers of the brothers, who were beatified as saints.

Ask anyone what they think of the Russian language, and you’ll likely hear the same answer: Difficult! If you believe the negative stereotypes about Russia, the lack of interest in its language seems understandable — it’s a dangerous country, a long ways away, freezing cold (etc. etc.). Nevertheless, we at I SPEAK Russian believe there are a hundred reasons to learn Russian! Here are just some of them:

You begin learning Russian and the best way to start is to learn to read! In this third lesson I will be talking about Russian alphabet and its sounds. We have already talked about the history of the Russian alphabet and you learned that it was created by a Greek monk St. Cyril. The contemporary Russian alphabet consists of 33 letters, some of which were borrowed from Greek and Hebrew.